Identify What You are Up Against

Sometimes, Identifying What You are Up Against
requires MORE than just hard Work! 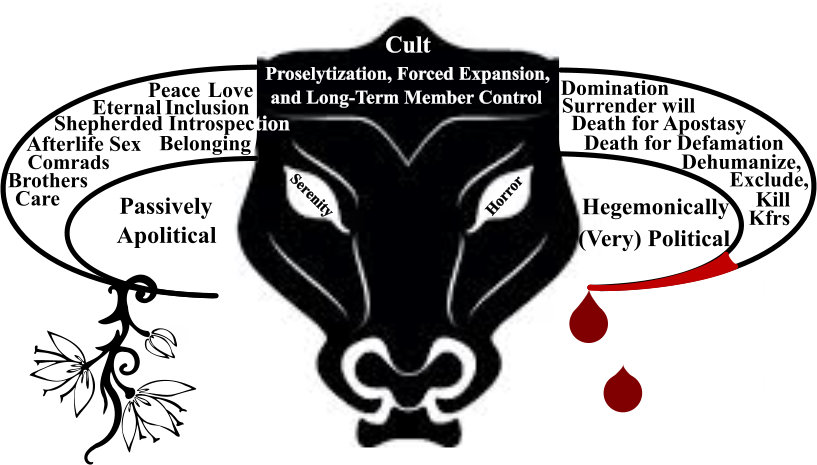 One Key to Forced Expansion

The Entity’s Simultaneous and Distinctively Dual Presentation of its Antithetical Selves:
War and Peace

When viewed from outside their controls, cults derive their (initial) proselytization-success and forced expansion powers from the contrived presentation of themselves in opposites; many people cannot assimilate double entendres. The contradictions, themselves, resulting from the dichotomy place the target into dissociation, which is manifested experientially by states of shock. It presents both individually and systemically, in this effect also meaning behaviorally, as confusion, numbness, disorientation, disbelief — sometimes even giddy euphoria or incapacitating divisiveness — and is always attended by interrogatories: why and what is happening here? During that rationally-cognitive vulnerable period, other cult development mechanisms — for example, promulgation of death for leaving the organization, and death or other punishments for criticism of the hierarchical top — are added, or emphasized and in other ways strengthened. The center, then, consumes the prey, leaving — depending on amounts and manner of participation — a party-line-filled shell of faux-success life consciousness, but not before extracting at the most profound level of sustenance all that it is, ever was, or would otherwise hope to be over the entirety of that life’s span.

That with which you usually save, or otherwise manage, yourself
may be encumbered by the attack

When faced with the challenge of cultic assault, the decision making capacities we expect/hope will, and sometimes do, save us from such patho-control quagmires, even, and I’ve found to be especially, for high intellects can become so encumbered during proselytization — or forced expansion — activities that conscientiousness, itself, does not adequately defend against ensconcement. Rational cognitive diligence, and again by itself, can fail both targeted individuals and entire polities. A parallel strategically and ontologically administered anti-cult apparatus may, however if applied in time, do the job.

When comparing the earlier referenced two horned violently aggressive cult-identifier model to Islam/Islamism — the entities’ activities motivating production of these current (in 2014-) SHOMblog essays — my answer to the question posed at the beginning of this essay is “both.” Moreover, despite its integration into culture and some non secular social management, then domination of the same, the comparison has held not only since Islam’s early days, but continued throughout all of them.

As a theoretical application of SHOM’s application, this blog shows how to account for and adapt to the referenced cultic influences. The effort also demonstrates how to identify the weaknesses such influences present as opportunities for defense by the cult’s targets, in this instance, us.